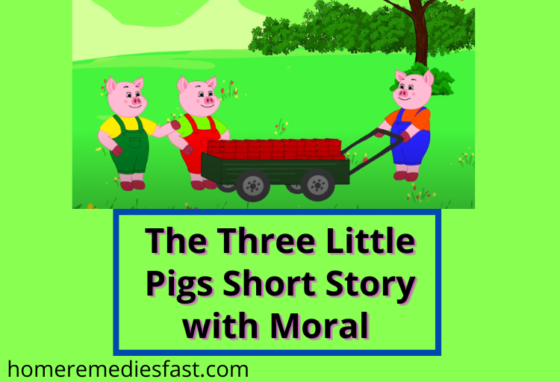 The Three Little Pigs Short Story with Moral and Pictures: Three Little Pigs Once upon a time in a beautiful forest, there was a small cottage. In that cottage, lived a Mama Pig with her three little piglets. One day, when they were old enough, mama pig called them.

My dear children, I have taken care of you till now. But now all of you have grown up. You have to be responsible for yourself and make your way around the world. It’s time for you to leave this home and live on your own.

So, the next day, the three pigs said goodbye to their mother and set off to seek their fortunes. After travelling the whole day, they set up camp to rest for the night.

[Pig 1] Brothers, we need to find a place to live. Camping in the forest like this is not safe.

[Pig 2] Yeah, you are right! We should make ourselves a house.

[Pig 3] Why not make three houses, one for each of us?

[Pig 1] We should make three houses close to each other.

The next day, the pigs found a place they liked. It was a beautiful, grassy meadow with a lake nearby. The first pig was very lazy. He wanted to quickly finish building his house so that he could have time to play.

[Pig 1] Building a house is a lot of work. I should make mine with straw. The straw will be lighter to carry, so it will take less effort. So, he went to a farmer and bought some straw.

The second pig was also somewhat lazy. He wanted to use sticks to make his house to finish his work quickly. He bought some sticks from a woodcutter.

The third pig was very wise and hard-working. He wanted his house to be strong and sturdy, even if it meant more work for him. He decided to use bricks to build his house. When he returned to the meadow with a cartload of bricks, his brothers laughed at him.

[Pig 2] He always likes to work more than necessary.

[Pig 1] Come on! Let’s get started on our houses. I want to finish as fast as I can. The first pig started building his straw house, and it was ready by evening.

The second pig also finished his stick house in just two days. Meanwhile, the third pig took great care to make his house safe and strong. It took him seven days of hard work to complete his house.

After a few days, a big bad wolf was passing by the meadow. He saw the first pig working near his house. He went up to the straw house and knocked on the door.

[Wolf] Little pig, little pig, let me come in. The first pig peeped outside from a hole in the door. He saw the wolf standing on the other side.

[Wolf] Then I’ll huff and I’ll puff and I’ll blow your house in! So the Wolf huffed and puffed and blew the house in! The little pig ran as fast as he could to his brother’s stick house.

[Pig 2] Hey! What happened? Why are you so scared?

[Pig 1] There is a scary wolf outside. Do not open the door. The wolf had followed the first pig to his brother’s house. He knocked on the door.

[Wolf] Then I’ll huff and I’ll puff and I’ll blow your house in!’ So he huffed and puffed and blew the house in! Both the pigs ran for their lives and reached the third pig’s brick house. They told him about the big bad wolf following them.

[Pig 3] My dear brothers, don’t be scared. The wolf cannot harm us here. The wolf had come to the third pig’s house. He was feeling very hungry after all the huffing and puffing and chasing the pigs. He knocked on the door.

[Wolf] Then I’ll huff and puff and I’ll blow your house in! And the wolf huffed and puffed, but he could not blow the house in. The brick house was very strong and easily withstood all the huffing and puffing. The wolf tried again and again, but nothing happened.

Now enraged, he punched and kicked the door and the walls, but couldn’t damage the house. He climbed onto the roof to get inside through the chimney.

The third pig heard scrambling sounds on the roof and understood Wolf’s plan. He ran and lit a fire in the fireplace.

As the wolf came down the chimney, his feet touched the fire underneath. Screaming, he sprang up the chimney, with his tail on fire, and fled the meadow, never to be seen again! The first two pigs realized their mistake and learnt a lesson that day.

Moral of the Story: Hard work and dedication always pay off.

Final words: We hope you have liked the article The three pigs short story with moral and pictures. You can share this story with your friends so they can know this interesting short story of three pigs.

Rapunzel Story For Kids in Short with Picture 2022