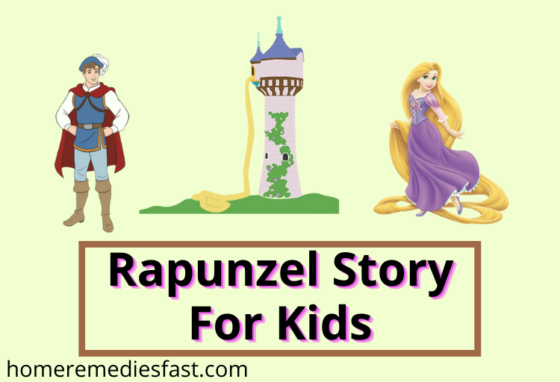 Rapunzel Story For Kids in Short with Picture

Rapunzel Story For Kids in Short with Picture: A long time ago, in a town, a man lived with his wife. They had no children. Husband and wife wanted a daughter as a child. After some time the wife became pregnant. She felt like eating cabbage but cabbage was nowhere to be found. Due to this she became ill.

Some distance away from their house was a witch’s house. Cabbage was planted in that witch’s garden.
Everyone was afraid of the witch but the man entered the witch’s garden to feed his pregnant wife. He plucked a cabbage and took it home for his wife.

Man told the witch about his pregnant wife. Then the witch made a deal with the man and told the man that you can take away as many cabbages as you want from my garden. But as soon as you had a baby. I’ll take it from you.

The man agreed to the witch’s deal for his wife’s health. After some days, the man’s wife gave birth to a daughter. According to the deal, the witch took the girl away from that man.

She had very long and blonde hair. The witch kept Rapunzel away from the outside world. She and Rapunzel lived in a tower house. In the tower there was no ladder to climb. The witch used Rapunzel’s long blonde hair whenever she came in and out of her towered house.

She used to come in and out by hanging on her hair. Rapunzel had a melodious voice and loved singing songs. One day the witch had gone out and Rapunzel was singing a song. Just then a prince was passing from there.

He was mesmerized when he heard the sweet voice of Rapunzel. He wanted to meet the girl who was singing. But he did not see any way to climb the tower.

After some time he saw the witch there. The witch asks Rapunzel to throw her hair down. Rapunzel dropped her long blonde hair from the tower, the witch climbed on her hair and went inside.

When Rapunzel saw the prince she was scared at first but the prince told her about himself. Then they became friends. Thus Rapunzel and the prince began to meet after the witch’s departure. Gradually the prince and Rapunzel fell in love.

The prince expressed his desire to marry Rapunzel. Rapunzel accepted prince proposal. Rapunzel wanted to get out of that tower. For this, the prince used to bring a piece of cloth to the tower every day.
Rapunzel started connecting cloth with each other.

One day when the witch was climbing on top of the tower with Rapunzel’s hair, by mistake it came out of Rapunzel’s mouth that you climb even slower than the prince. Due to this the witch suspected that someone would come after her.

In anger, She scolded Rapunzel very badly, cut off her long blonde hair and left her in a desert. The next day the prince called on Rapunzel to climb into the tower. But the witch was present in the tower at that time.

She threw Rapunzel’s hair down. The prince began to climb the tower with her hair. When he went upstairs he saw the witch there. The witch pushed the prince from above. The prince fell down to the ground and got a bush in his eyes that made him blind.

The prince wandered in the forest and reached the same desert. Where was Rapunzel. He heard Rapunzel’s song there. The prince called to Rapunzel and she came over there.

Then they met each other. The prince fell asleep in Rapunzel’s arms. Tears welled up in Rapunzel’s eyes. As soon as those tears fell in the eyes of the prince, The prince’s eyes fixed and he began to see.

After this the prince went to his kingdom with Rapunzel. There everyone welcomed them and prince and Rapunzel got married. They started living happily.

We hope that you have liked the post Rapunzel Story For Kids in Short with Picture. You can share this article with your friends. So that they too can narrate this story to their children.