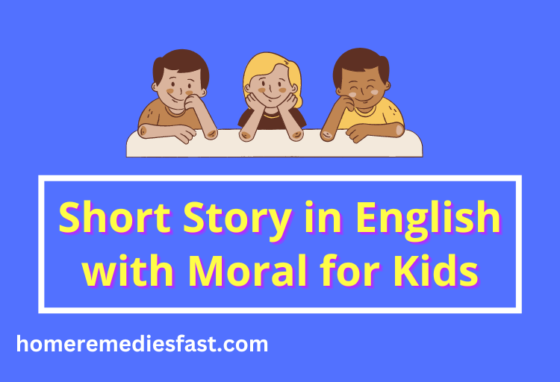 Short Story in English with Moral

1. The Adventure of Peter Rabbit

Short Story in English with Moral: Once upon a time, there was a little rabbit named Peter. He lived in a cosy burrow in the forest with his family. One day, Peter decided to explore the forest and see what kind of adventures he could find. He hopped along the path, taking in all the sights and sounds of the forest. He met a friendly butterfly who showed him a beautiful flower garden. As he hopped through the garden, he came across a delicious-looking carrot.

Just as he was about to take a bite, he heard a loud noise and turned to see a fierce-looking wolf. Peter was scared, but he remembered a lesson his mother had taught him: never give up. He stood tall and faced the wolf, and with a little hop and a leap, he was able to outsmart the wolf and escape. From that day on, Peter was known as the bravest rabbit in the forest.

The moral of the story is that determination and courage can help you overcome difficult situations and fear. Peter was able to outsmart the wolf and escape due to his determination and the courage he had to face the wolf. This story also teaches the importance of not giving up and having the confidence to stand up for oneself.

2. The Treasure of Jack, the Wise King

Once upon a time, in a far-off kingdom, there lived a king who had three sons. The two elder sons were very proud and selfish, but the youngest son, named Jack, was kind-hearted and humble. The king loved all of his sons, but he knew that one day, only one of them would be fit to rule the kingdom after him.

One day, the king announced that he would be going on a long journey and that whichever son could bring him back the most valuable treasure would be the one to inherit the kingdom. The two elder brothers set off with their armies, but Jack had no army to command, only his courage, wit and a small donkey.

Jack travelled through mountains, valleys and deserts, facing many dangers along the way. He finally came to a cave, where he discovered a beautiful princess who was under a spell and was being held captive by an evil sorcerer. Jack defeated the sorcerer and freed the princess. He then brought her back to the kingdom as his treasure.

The king was overjoyed to see his youngest son and was even more delighted when he saw the princess. He knew that Jack had not only brought back the most valuable treasure but also saved a kingdom from an evil sorcerer. The king declared Jack as the true heir of the kingdom, and he ruled with wisdom, justice and love.

The moral of this story is that inner qualities such as kindness, humility, courage, and wisdom are more valuable than material wealth or a powerful army. These qualities are what truly makes a person fit to lead and make wise decisions. Additionally, the story also highlights the importance of selflessness and compassion, as Jack’s actions in rescuing the princess and defeating the sorcerer ultimately benefited not only himself but the entire kingdom.

3. The Ant and the Grasshopper

Once upon a time, in a meadow, there lived an ant and a grasshopper. The ant worked hard all summer long, storing up food for the winter while the grasshopper played and sang. When winter came and the snow fell, the ant had a warm home and plenty of food, but the grasshopper had nothing and was cold and hungry.

The grasshopper asked the ant for some food, but the ant refused, saying “You should have thought about the future and worked as I did instead of wasting your time singing and playing.”

The moral is that it is important to plan ahead and to be prepared for the future.

4. The Tortoise and the Hare

Once upon a time, there was a hare who was very proud of his speed. He would often brag about how fast he could run and would make fun of the slow and steady tortoise. One day, the hare was challenged to a race by the tortoise and, thinking he would easily win, he accepted.

The moral is that slow and steady progress will ultimately lead to success, while overconfidence and complacency can lead to failure.

The boy thought it was a hilarious joke and continued to cry “Wolf!” every time he was bored. But one day, a real wolf came to the village and the boy cried out “Wolf! Wolf!” again. But this time, no one came to help him as the villagers were tired of his pranks and did not believe him. The wolf attacked the boy and the village, causing a lot of damage.

The moral is that honesty and credibility are important, and when they are lost, they can have serious consequences.

Once upon a time, there was a king named Midas, who was known for his great wealth and love of gold. One day, the god Dionysus granted King Midas the ability to turn anything he touched into gold. At first, Midas was thrilled with his new power and used it to turn everything he owned into gold, including his food, his clothing, and even his beloved daughter.

But as time went on, Midas realized that his golden touch had brought him nothing but misery. He was unable to eat or drink, and he had lost his family and friends. He begged Dionysus to take back his gift, and the god mercifully took back the golden touch, but not before teaching the king a valuable lesson about the dangers of greed.

The moral is that too much desire for wealth and material possessions can lead to negative consequences, and it’s important to be content with what we have.

Once upon a time, there was an ugly duckling who was born into a family of beautiful swans. The duckling was always made fun of by the other animals because of his odd appearance, and he felt very lonely and out of place. He decided to leave his home and set out on his own to find a place where he belonged.

As he travelled, he met many different birds and animals, but none of them accepted him. Just when he had given up hope of ever finding a place where he belonged, he came upon a group of swans, and as he got closer, he discovered that he too was a swan.

The moral of the story is that true beauty lies within, and we should not judge others based on their appearances. With time, everyone will find their true place and be accepted for who they truly are.

Once upon a time, there was a poor woodcutter who lived in a small cottage on the edge of a dense forest. He made a living by cutting down trees and selling the wood to the villagers. One day, as he was cutting down a tree, an axe fell out of his hand and landed in the river. The woodcutter was devastated as it was his only tool and he couldn’t afford to buy a new one.

Feeling hopeless, he decided to take a walk in the forest and as he was walking he stumbled upon a magical golden axe, which he believed was a gift from the gods. He used this golden axe to cut down the woods and sold it to the villagers, and he became very wealthy.

But he could not hide the truth, and eventually, he confessed to the villagers that he had found the golden axe in the forest, and he returned it to the rightful owner, which was the river god. The river god was pleased with his honesty and rewarded him with even more wealth and prosperity, not just for him but for his village as well.

The moral of the story is that honesty is always the best policy, and it will bring you more blessings in the long run.

Once upon a time, there was a giant who lived in a beautiful garden. He was very selfish and did not like children, so he built a high wall around his garden to keep them out. As a result, the garden became very gloomy and the flowers and trees stopped blooming. One day, a group of children managed to sneak into the garden, and as they played and laughed, the garden came alive once again. The giant, seeing the change, realized his mistake and tore down the wall, allowing the children to play in the garden whenever they wanted.

The moral of the story is that being selfish and closed off to others can lead to a lonely and unhappy life, and that generosity and kindness can bring joy and beauty to those around us.

Once upon a time, there was a tree that stood in a forest. The tree was very generous and would give everything it had to those who needed it – its branches for the animals to play on, its fruit for the birds and squirrels to eat, and its trunk for the boy to build a boat. The boy would come to the tree every day, and as he grew older, he would ask the tree for more and more.

The tree, happy to oblige, gave the boy everything it had until it had nothing left to give. The boy, now a grown man, returned to the tree one day, and the tree, now nothing more than a stump, could only say “I am happy, I am here, I am alive, I have given you all that I had to give.”

The moral of the story is that true giving is done without the expectation of receiving anything in return, and that true love is the willingness to give until we have nothing left to give.

Which is the best English story?

The Best English story is the tortoise and the hare.

What is good moral for a short story?

We hope you have liked the article, which is a collection of short stories in English with a moral. You can share this post with your friends and relatives so they can also tell their kids these moral stories.