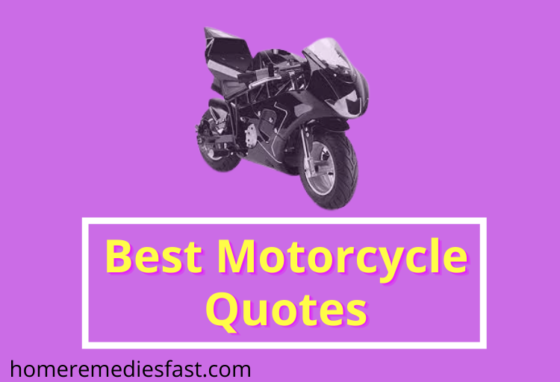 
Motorcyle quote: People who are bikers and love their motorcycle. We have brought some very special motorcyle quotes for such people. Those who reflect the spirit of biker and also make them feel vivacious. You can also share these famous adventure bike quotes with your biker friend.

Those extreme-sports kids today are good, but they have it easy. Try falling off of a motorcycle going 70 or 80 miles per hour on asphalt. Believe me, nothing equals it. – Evel Knievel

A lot of people are crazy, cruel and negative. They got a little too much time on their hands to discuss everybody else. I have a limited amount of energy to blow in a day. I’d rather read something that I like or watch a program I enjoy or ride my damn motorcycle or throw back a couple of shots of tequila with my friends. – Queen Latifah

I am the audience. I want to observe people. Even when I’m playing drums onstage, I’m watching people. I’m looking at them and their faces and their T-shirts and their signs. And travelling by motorcycle, especially, the world is just coming at me. – Neil Peart

The most important thing is to have a good relationship with the bike… you have to understand what she wants. I think of a motorcycle as a woman, and I know that sounds silly, but it’s true. – Valentino Rossi

I enjoy going on motorcycle trips and stopping in small towns and enjoying drinks with the locals. – George Clooney

I don’t have a mullet, but going into season one on ‘The Walking Dead,’ I asked to have a mullet, and everybody talked me out of it. Because I’d have to wear a mullet when we were not shooting every day. I have that motorcycle, wings on my vest, the crossbow… Maybe a mullet would’ve thrown me over the edge. – Norman Reedus

It feels blessed to me. Because I go to comic cons, and people come up and they say, ‘You’re the reason I ride a motorcycle. You’re the reason I became a mechanic.’ And there are people who love ‘Scream’ and ‘The Waterboy,’ ‘Royal Pains,’ ‘Parks & Rec,’ ‘Arrested Development.’ And now ‘Barry.’ And then there are kids who only know me as an author. – Henry Winkler

I sailboat raced, I love to go out on my motorcycle alone, but I also love my family dearly. I love that aspect of my life as well. – Bob Seger

I have been hearing gossip and lies since I began working. When I was 17, I used to get very angry because I opened a magazine and I saw myself in a picture on a motorcycle, and the headline was, ‘I’m getting married next month. – Penelope Cruz


We hope that you will like the motorcycle quotes given in this article. You can share these biker quotes with your friend and also comment below.